The Lantern started reporting on Black anti-rape activism during the 1980s and early 1990s. The Lantern primarily documented workshops about sexual violence and how it uniquely affects Black women. However, there was a noteworthy lack of Black Anti-Rape activists’ first-person account on any of these events, especially from Black women.

In the 1980s, The Ohio State University’s Rape Education Prevention Program (REPP) included a specific workshop facilitated by Ruth Gresham in their REPP Video Project that addresses rape and its specific impact on Black women and the Black community at large. 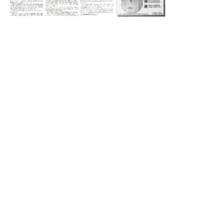 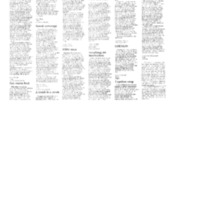 In an “Around the Oval” section of The Lantern published on January 14, 1988, there is an advertisement for “RAPE EDUCATION FOR WOMEN OF COLOR, a workshop about rape and racism for black women will meet at 7:30 pm Tuesday in the Ohio Union Memorial Room. For information and registration 292-8473.” Similar workshops persisted into the 1990s.  One such example is the workshop that was held in 1990 in the African/African-American Hall of Fame room at the Black Cultural Center called “Rape Education & Prevention Program and Women of Color Consortium.” The workshop focused on discussing rape prevention for Black women. Another workshop that was hosted was Ruth Gersham’s “Stop Rape, Stop Racism: An Africentric Perspective on Rape Prevention” and self-defense workshop that was held on April 11, 1991. Throughout her workshops and REPP Video Project, Gersham stated that Black women report less due to fear of community and police backlash. Gresham would later be honors in 1993 alongside other anti-rape activists.

These workshops did face some pushback. Opposition to rape prevention specifically for Black women can be seen in the November 3, 1989 Letters to the Editor section. The letter titled “A better focus” by Chris Scheffer voices opposition because they believe that the “Rape Prevention for Black Women” excludes white women. 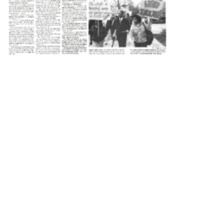 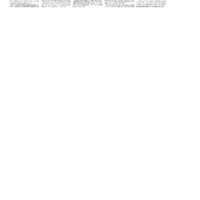 As said in the “In Solidarity” section, white supremacy is upheld through sexual violence. Black men are not immune to these racist characteristics. However, in this case, Black men are codified as a threat. The very notion of sexual violence against a white woman from Black men specifically reinforced racist beliefs throughout US history. On April 12, 1990, the Black Association for North Campus Students and African American Students sponsored a “No More Lies” march in response to the supposedly false allegations made by Michelle Ann Yentes. The march organizers wanted to highlight the history of violence faced by Black men because of false rape allegations and to assert that behavior will not be tolerated. On April 20, 1990, The Lantern reports that Yentes pled not guilty to “making a false report to OSU police”; however, Deputy Chief Richard Harp said that Yentes confessed to “fabricating the story” on April 2nd. Alpha Phi Alpha Fraternity called for Yentes’ expulsion.

Women’s groups had to grapple with the tension between unequivocally believing survivors and encouraging survivors to come forward with having to confront how rape has been historically weaponized against Black men and not wanting to invalidate the concerns from Black students. Gloria McCauley, coordinator of Take Back the Night, voiced her support for the “No More Lies” march and did not pass judgment against Yentes. McCauley instead noted that she felt that false accusations were “not typical.” Other Women’s groups expressed worry about how this incident will impact the overall perception of survivors coming forward. 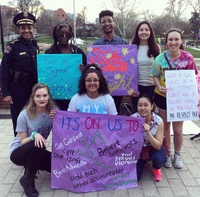 Black anti-rape activism has continued into the 2000s. Most evidently in the organizational leadership in Take Back the Night at Ohio State (TBTNOSU), It’s On Us, and tOSU Safe Space Twitter Account. Shayla Ferguson (who was also the Vice President for OSU’s NAACP chapter) and Arielle Forte (who was also the Community Outreach Chair for OSU’s NAACP) were both students involved in the 2018 revival of Take Back the Night and became Co-Vice president and Event’s Chair respectively when Take Back the Night at Ohio State (TBTNOSU) became an official student organization in 2019. Chrissy Fears was the TBTNOSU's first secretary and is the 2020-2021 Membership Chair. Nekyla Hawkins was one of the people who established It’s On Us chapter at OSU in 2018 and she was the 2019-2020 President. Her successor is Sydney Green. tOSU Safe Space Twitter Account (@tOSUSafe) was founded in June 2020 by a Black woman who wanted to help survivors by creating a platform to out their rapists/abusers. As of August 2020, the account has over 3500 followers and nearly 850 tweets. tOSU Safe Space founder participated in an interview with me that can be read below. 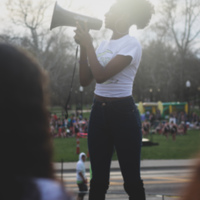 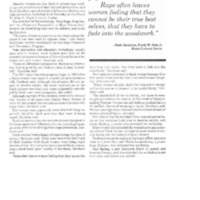 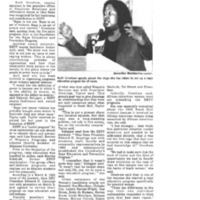 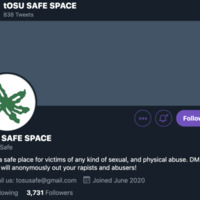