In the early 1980's, Gay Alliance (formerly Gay Activist Alliance) encountered some issues with on-campus religious group leaders. Apparently, in 1982, the leaders of multiple religious student organizations, namely the OSU Bible Studies group, complained about the "involuntary funding of campus gay groups with student organization money" ("Campus Religious Leaders Attack Funding of OSU Gay Organizations"). The religious groups believed that the OSU Gay Alliance and Gay Woman's Support should not have received student funds considering that the groups were "special interest, minority organizations" that "should not be supported by students who disagree with those interests." However, The Lantern reports that, of the $125,000 available to 86 OSU student organizations in 1982, GA and GWS combined  received only $625, .5% of the total funding available. The article concluded that the funding rules would remain the same, per the Student Organization Finance Office.

However, this was just the beginning of a months-long public dispute between OSU Bible Studies and GA. Later in 1982, Gay Alliance filed a "grievance" against the Christian group, charging them with discrimination against homosexuals ("Gay Alliance Registers Complaint, Charges Bible Studies with Prejudice"). The complaint claimed the organization discriminated against gays in multiple ways, including explicitly expecting members to "change their sexual orientation from homosexual to heterosexual." A month later, The Lantern followed up with anonymous interviews with three of the students who testified in the discrimination investigation ("Witnesses Say Bible Group Discriminates"). All three testified against Bible Studies, outlining details of psychological harm and attempts to change the students' sexual orientations to heterosexual.
Despite the witnesses' testimonies for the discrimination charge, a Lantern article published in early 1983 reports the group was found not guilty ("Inquiry Finds Bible Group Not Guilty of Discrimination"). A GA councilman was quoted saying he hopes "the controversy would make the Bible group a little more cautious in its practices," and added that "a religious group that cannot cater to the entire campus community should not be a campus organization." Another GA councilman was quoted as saying the suit was successful, as it "awakened people to the idea that GA is 'not going to sit by and tolerate it (discrimination).'" 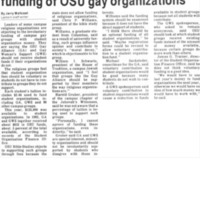 (maybe provide caption/description of the events described in this article, following a shorter overview as the text for the page as a whole?) 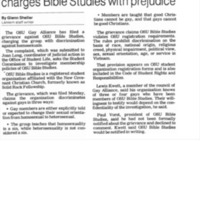 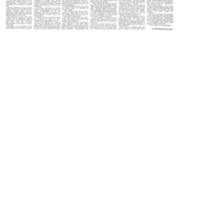 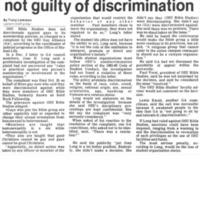