According to The Lantern, the early 70’s were a time of dispelling myths and raising awareness about homosexuality. One article, published in April of 1975 and titled “Gay Activists Seek Equality,” recounted interviews conducted with the president and treasurer of GAA, who were hoping that 1975 would be “the year gay stereotypes can be eliminated in the minds of ‘straights.’” The activists had been visiting OSU classrooms to talk about homosexuality and quash harmful rumors and preconceptions.
The article fit the then-popular model of other Lantern pieces with similar goals: to present members of the OSU community with images of gay people as relatable, normal, and, ultimately, safe. A gay student who wished to remain anonymous was quoted saying: “I’m gay and normal just like the guy down the street.” GAA’s president contributed his thoughts as well: “Not all gays have high voices and being gay is not an infectious disease...the public needs to be better educated about homosexuals.”
Only two months prior, The Lantern had published a piece titled “Gays Discuss Sexuality,” which detailed a classroom Q&A featuring three homosexual students and alumni. The activists responded to student questions about cross-dressing, coming out, and harassment, all while maintaining an air of relatability and normalcy. When asked what made him gay, sophomore Robert Smith drily responded, “my birth.” The article is another example of measures taken by GAA to introduce students to “normal” gay people and increase familiarity with homosexuality.
The same agenda was echoed in another piece, “OSU Lesbian Works for Acceptance,” published in April of ‘72. This one details the day-to-day experience of Sue Vasbinder, an “average college girl,” who assures readers that she is “‘not interested in recruiting heterosexuals into a homosexual way of life.’” Author Elizabeth Vuchnich adds that Sue “does not seem to be possessed by ‘demon spirits,’” nor is she a “man-hater.” The article goes on to describe some of the future challenges Sue will face as a lesbian, such as employment discrimination and lack of community and role models. It also details some of Sue’s political involvements, ranging from GAA to Radicalesbian ideology. The article ends with Sue answering “no” to being asked if she wishes she could live as a heterosexual.
Click here to read the Radicalesbian manifesto! 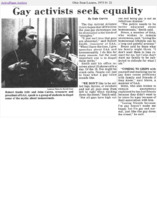 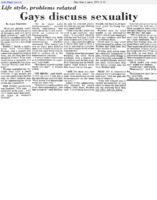 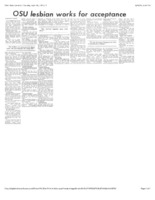 ← Introduction
Homosexuality in Academia →
Gay Students in the Early 1970's