After having taken a special topics English class titled “LGBTQ Literature” in fall of 2017, Sam found it particularly interesting to read about the very first class offered on the subject, almost exactly 40 years ago. In the 2017 gay literature class, which fulfills credit requirements in both the English and WGSS departments, Sam read novels that ranged from the fictional account of Gertrude Stein and Alice B. Toklas' gay in-home chef to a Chicana coming out narrative to the story of a young boy being sent to gay conversion camp. Reading these contemporary stories while doing research on their 1970's equivalents was really fascinating, especially knowing the popularity of this type of course on campus today.
According to The Lantern’s “Class to Study Gay Roles, Lives,” the first ‘gay studies’ course was taught in the Spring quarter of 1977. Housed within the English Department, English 275, Thematic Approaches to Literature, was to explain “how gay literature reflects the realities of gay life and how minority status affects gay literature,” according to Professor Robert Kelton. Kelton was also quoted saying he “hopes he gets enrollment from ‘straights’ as well as gays,’” and despite a limited course enrollment, he felt prepared to teach as many students “as want the course.” The VP of GAA at the time contributed, saying “A University this big should have a course like this,” and that “anything to help educate people would be important.”
The Lantern followed up on the course with another article published two months later, which provided more detailed information about the course, including perceptions of the students enrolled in Kelton's class (“Gay Literature is Novel for OSU”). Goals of the course included discussing “whether the homosexual element of literature is of literary interest,” as well as to determine “whether there is a discernible gay literary tradition, whether there is common ground between gay male and lesbian literature and how successful gay literature is in reflecting the realities of daily life.” The course included classic material by Sappho and Shakespeare, as well as works by Walt Whitman, Oscar Wilde, and James Baldwin. Particularly interesting was the fact that Professor Kelton and the class “made a point” to not discuss the sexual orientation of the class members, although some students did report “taking the course to help define their own sex roles.” Students enrolled in the course seemed to be enjoying it, quoted in The Lantern that they “would like to see the University offer similar courses” and that the course has “more active participation on the part of the students.” The article ended noting that there were no plans to offer the course on a regular basis; now, there’s a wide range of LGBTQ literature classes offered every semester, perhaps due to the push nearly a decade later for an office of gay studies. 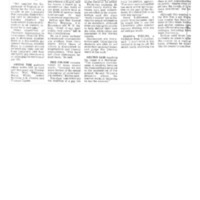 Gay Literature is Novel for OSU 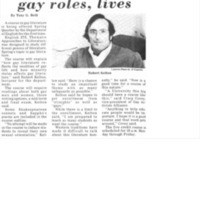 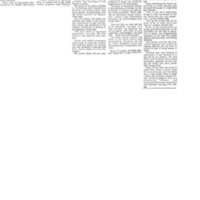