Women and Allies Rising in Resistance (WARR) was a group that appeared at OSU in the early 2000s. The earliest mention of WARR in The Lantern was in 2005. Its main purpose seemed to be to promote social justice issues, including but not limited to anti-rape work. One of WARR’s earliest events was their Take Back the Night march and speakout event on May 11TH, 2005 that had around 100 people in attendance. WARR continued to host Take Back the Night marches throughout their time on campus. WARR’s coordinator, Deborah Schipper was documented as a spokesperson for the May 16th, 1983 “Women Take Back the Night” march that was sponsored by Women Against Rape (WAR). Schipper was also the coordinator of the OSU Rape Education Prevention Program (REPP) during her time as WARR’s coordinator. It is not clear if WARR created itself in WAR’s image, but it is evident that both of these groups had similar aspirations of changing the culture on OSU’s campus.

WARR did not just plan marches and educational events, they also worked with OSU administration. After their continual protests in 2010 and 2011, WARR was able to finally work with the OSU Board of Trustees to revise the student sexual misconduct policy to redefine consent as something that “must be freely given and can be withdrawn at any time." Tess Sabo, WARR president in 2012, led this campaign.

WARR seemed to have disbanded in 2015. However, Madison Eagle, a previous WARR member continues to influence campus anti-rape activism in her role as the Multicultural Center’s Women Student Initiatives specialist and as the advisor for Take Back the Night at Ohio State (TBTNOSU). 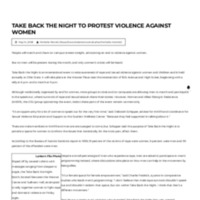 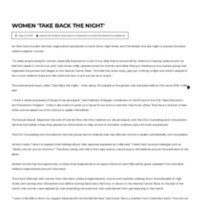 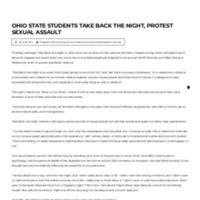 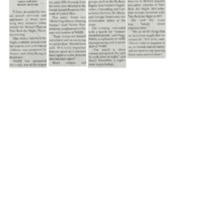