One of the greatest indicators of community outrage regarding sexual violence at The Ohio State University was after an incident in Steeb Hall in 1983, which was later called “Steebgate.” On February 22-23, 1983 a survivor came forward after accusing several athletes of gangraping her in Steeb Hall dormitory. There were rumors from Resident Advisors and Office Assistants at the time that superiors were calling for the incident to be kept secret. Any efforts that may have occurred to keep the Steeb Hall incident a secret were spectacularly unsuccessful.

Protesters picketed the March 3, 1983, Ohio State v. Illinois basketball game at St. John Arena calling for justice for the survivor and the release of more information about the incident. The protestors also protested again on March 5, 1983, in front of nearly 14,000 basketball fans who were attending the St. John Arena during the Ohio State v. Purdue basketball game. Protestors continued to pressure the university to release more information in regard to the Steeb Hall incident by staging protests on March 7, 1983 outside of the Administrative Building. Protestors chanted “Jennings, Jennings come outside, what is it you’re trying to hide.” According to The Lantern, neither WAR nor WAC as organizations specifically claimed to be directly organizing these protests. However, the newspaper did identity Robin Massullo as an organizer. Massullo is documented to have been both a Women’s Action Collective member and a Women’s Against Rape member. 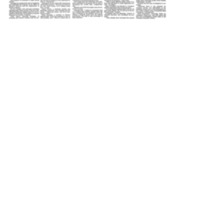 The Steeb Hall incident and the consequential pressure that accompanied it from students and other women’s groups were defining factors in President Jennings’ decision to approve the Rape Education and Prevention Program (REPP) on March 10, 1983. REPP’s purpose was to raise awareness about rape culture on campus and prevent the occurrence of sexual assault through education. You can read more about REPP here.

Even though the formation of REPP was seen as a positive for the university, the trial of the students accused in the Steeb Hall incident would soon put the OSU administration back in the hot seat. On April 4, 1983, after 20 minutes of deliberation Franklin County grand jury, the courts found that there was not enough evidence, and the accused were acquitted. 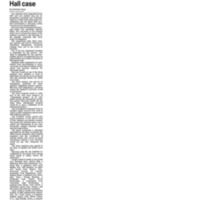 Board suspends 2 in Steeb Hall Case

After the court of law acquitted the accused students, The Ohio State University conducted its own trials. Six students had hearings before the university judicial panel. Two students were suspended for the summer quarter and another student was put on disciplinary probation. By law, the university could not release the names of the students involved in the hearings or the possible violations that were being investigated. Although the accused students’ names were released earlier because of their names appeared in public court documents. Many people also voiced their opinion that the victim/survivor was being favored because the press did not release their name alongside the accused. 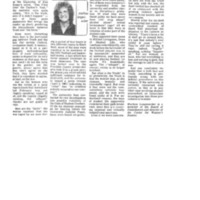 In October 1983, the Dean of Student Life Mitchel D. Livingston suspended the sentences of the 3 students found in violation of the student codes. Many called into question Livingston’s objectivity and his decision to suspend the sentences as an indication of prioritizing athletics over justice since his pardon came a week or so before the fall sports rosters were released. Additionally, many said that Livingston’s ability to simply pardon these three after they were found guilty by a university judicial panel indicated immorality and showed the university’s justice system as inherently unfair. Marlene Longenecker, the Director of the Center for Women’s Studies in 1983, was an outspoken critic against Livingston’s decision. Livingston and Marvin W. Homan, Director of Sports Information, denied Longenecker’s coverup allegations. 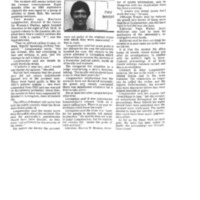