*I would like to recognize the complexities of the word “Hispanic” before beginning this section. I recognize that the label “Hispanic” is not only Eurocentric but also has been used to obscure individuals’ other heritages, such as their indigenous identities. The Lantern uses the word “Hispanic” frequently and so the use of “Hispanic” that will be used in this piece is to match the source material. While “Hispanic” may have been an acceptable term in the past, I have titled this section Latinx Anti-Rape Activism since, at this moment, I believe that “Latinx” better encompasses the demographic that The Lantern is attempting to recognize with its use of “Hispanic.” 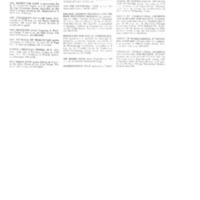 The first time The Lantern reported on Latinx anti-rape activism, which also encompasses sexual violence, was in 1989. The “Around the Oval” section of The Lantern was promoting a film screening of “Broken Promises” presented by the Hispanic Student Programs and the Rape Education Program. Gilda Lopez, the coordinator of the Hispanic Student Programs, led a follow-up discussion after the film on “domestic violence in Hispanic life.” 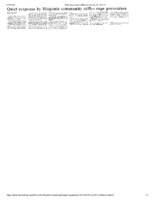 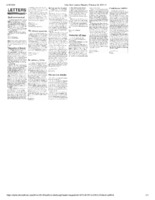 In her piece “Quiet response by Hispanic community stifles rape prevention,” Tracy Turner reports on the lack of Hispanic student participation in rape prevention workshops. She states that a workshop targeted toward Hispanic women had zero Hispanic attendees. Several people, including Julia Arbini-Haywood (Ohio Department of Human Services, Family Violence Prevention Program) and Portia Gonzales McDade (Outreach coordinator of the National Assault Prevention Center), were interviewed by Turner and attribute the lack of participation to different cultural values that lead to apathy or naiveté. McDade stresses that “If it doesn’t feel comfortable, you can say no.”

In her letter to the editor “Remarks Off Base” on February 4, 1991, Irena Ledesma, a Graduate student in History rebuked Turner’s piece, specifically in regard to Arbini-Haywood and McDade’s remarks. Ledesma asserts that Hispanic culture is not to blame for lack of attendance but rather the lack of understanding of Hispanic women’s issues. Ledesma specifically speaks on how class differences and the need “to hang in there becomes more important than finding out how to prevent rape.” Ledesma also makes an important note that she has been able to develop her own system to protect herself without the aid of these workshops. She also asks, “when has being able to say no been enough to prevent rape?” 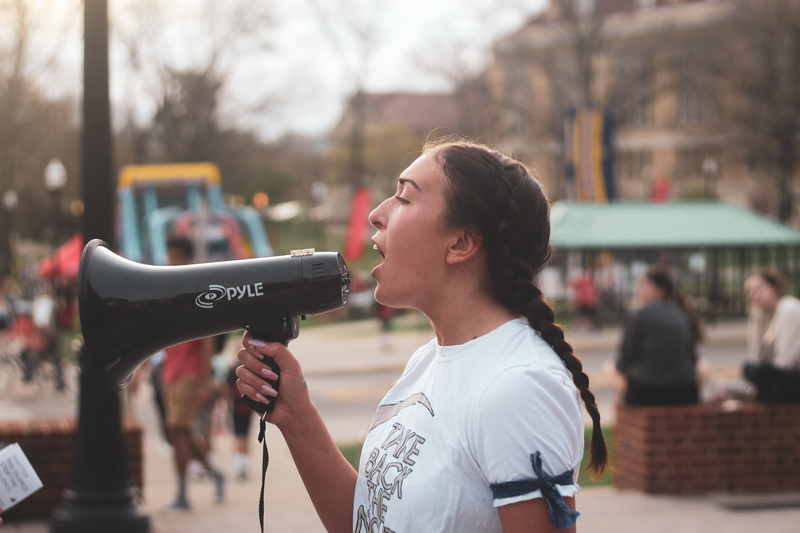 Emma Terres at the 2019 TBTN March

Ledesma’s letter highlights several things. First, anti-rape programming that frames race and non-white culture as the causes of sexual violence reinforces racist stereotypes. Second, the institutionalization of rape prevention in the form of formal workshops or programs is inaccessible to certain demographics. Third, rape prevention can be learned through lived experiences and community knowledge. The latter point forces us to also consider the limitations of examining rape prevention methods within the Latinx community through The Lantern. The support systems that Ledesma writes about that she has created for herself are not going to be found within the pages of The Lantern.

Latinx involvement with anti-rape activism continues into the 2000s. Emma Terres played a crucial role in the 2018 revival of Take Back the Night on campus. Flavia Lobato who was Take Back the Night at Ohio State’s (TBTNOSU) first Communications and Social Media chair, has also acted as a spokesperson on behalf of TBTNOSU at other events, such as the #Fight4Her "She Decides Day" rally.